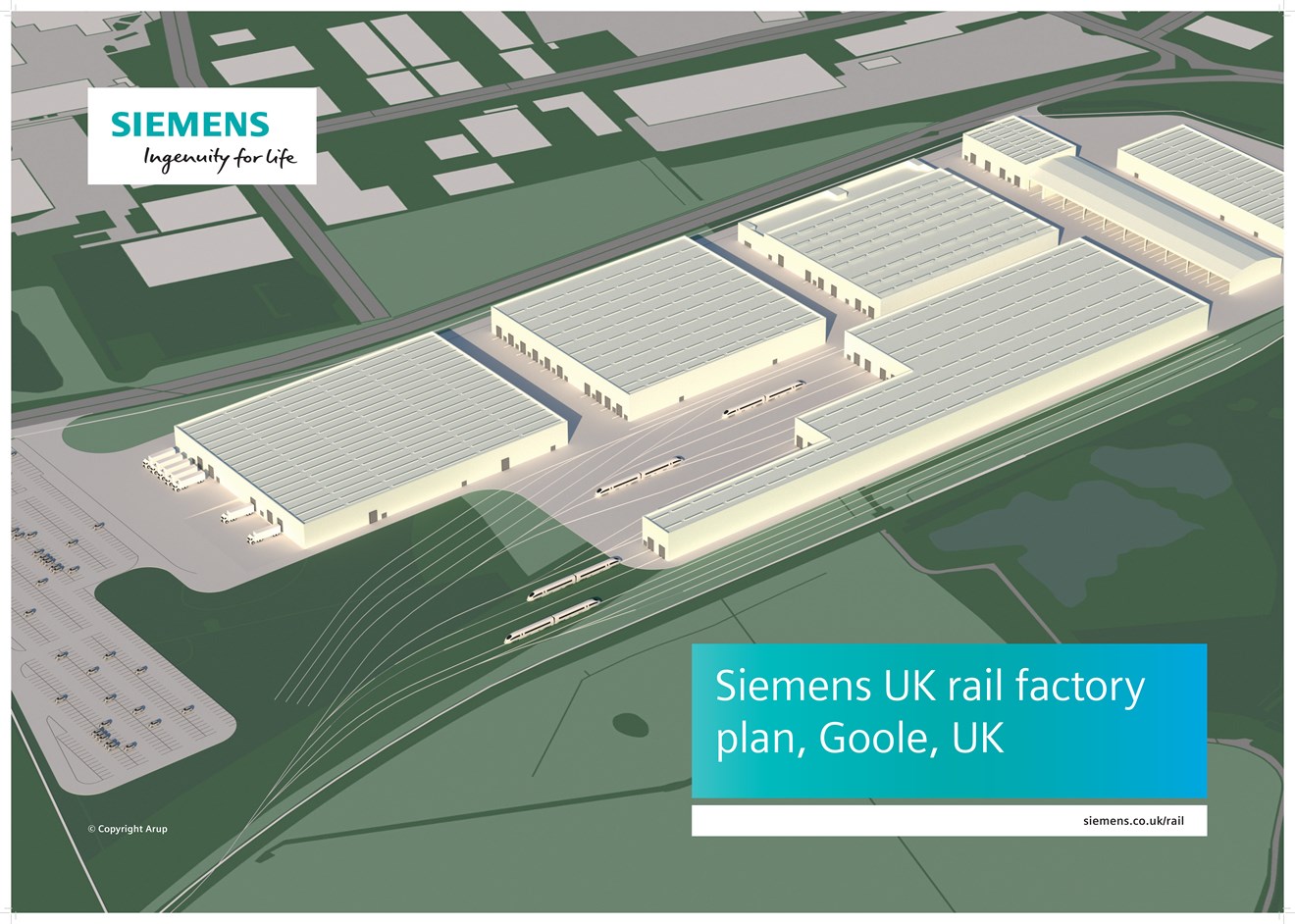 East Yorkshire to benefit from major investment in British manufacturing

Siemens has signed a long term agreement for lease of land in Goole, East Riding of Yorkshire, with plans to establish a new state-of-the-art factory to manufacture and commission trains. This development, which could mean an investment of up to £200m, is a major step forward for Siemens’ journey in the UK. Siemens aims to start phased development of the 67 acre site later this year, if investment conditions are met, and subject to the company’s success in major future orders.

The new factory could employ up to 700 people in skilled engineering and manufacturing roles, plus an additional 250 people during the construction phase. Around 1,700 indirect jobs are expected to be created throughout the UK supply chain.

Juergen Maier, Chief Executive at Siemens UK, said: “We’ve said for some time that future success for Siemens in the rail industry would see us opening a rail manufacturing plant here and this announcement provides additional substance to those words. Having considered multiple locations in the UK, I’m delighted to confirm that we’ve identified a site in Goole for our new UK rail factory which not only has the potential scale we need for a facility of this size but also ready access to the skilled people we’d need to build and operate the factory.

“This investment has the potential to have a tremendous impact on the Yorkshire economy and the North of England as a whole, ensuring that the benefits of infrastructure spending are spread widely and helping to ensure the ongoing development of the UK rail industry.” “From delivering brand new and refurbished trains through the Great North Rail Project, our plans to upgrade the Transpennine Route to our investment in Yorkshire’s roads, we are driving forward job creation, economic growth and unlocking the potential of the Northern Powerhouse.” Gordon Wakeford, Managing Director of the Mobility Division for Siemens in the UK, said: “We have been a major part of the UK rail industry for over 20 years and have already invested hundreds of millions in our facilities, our people and technology over the past five years alone. This proposed major new investment cements our company’s desire to further its presence in the UK’s rail market and underpins the ongoing importance of the market here to our rail business globally. We are looking forward to working with our UK industry partners and supply chain to bring this vision for the future to reality.”

The detailed plans for the factory, which is located at the Goole 36 development adjacent to junction 36 of the M62 motorway, highlights an extensive footprint including manufacturing and commissioning buildings, warehouses, offices, and stabling sidings with potential for the development of a test track. Andrew Percy, MP for Goole & Brigg, said: "This fantastic commitment from Siemens chimes perfectly with the vision we have for Goole 36 as a new centre for skilled engineering jobs locally. I am delighted that Siemens have chosen the Goole site and I will be continuing to work with Siemens and the Government to bring this investment to fruition. This has the potential to be transformative for our area and for local young people. It also builds on Siemens’ other recent investment in East Yorkshire with their wind turbine facility in Hull."

Stephen Kinsella, Director of Land at Homes England, said: “The announcement by Siemens is great news for Goole and it is fantastic that we have been able to create an enterprise zone on our land which will now help create hundreds of sustainable jobs. “By building the new road, we have opened the site up to not only Siemens but other companies whose investment is likely to create and support 1,000 new jobs”

Councillor Stephen Parnaby OBE, leader of East Riding of Yorkshire Council, said: “We’re delighted Siemens has secured this key strategic site and has such exciting plans for its development.

“We’re committed to supporting Siemens’ ambitions to establish a major manufacturing facility for the UK rail industry in Goole, which would deliver significant economic benefits to the East Riding of Yorkshire, the wider region and the country as a whole.” Siemens is already one of the biggest employers in the UK rail sector, with 4,400 employees working in rail and wider transport-related roles. The new facility will complement Siemens’ existing operations, comprising some 450 trains in service and eight purpose-built maintenance facilities, plus wider activities in electrification, signalling and train control technologies.

Recent examples of Siemens’ commitment to the UK include:

Home England is the new housing delivery organisation that has been created to adopt a more commercial approach to respond to the long term housing challenges facing this country. The new, expanded agency will play a far bigger role in investing in supply and intervening in the market to help deliver 300,000 homes a year by the middle of the next decade. Homes England will act differently from its predecessor, bringing together money, land, expertise and planning and compulsory purchase powers to accelerate the supply of new homes and address affordability issues in areas of highest demand.