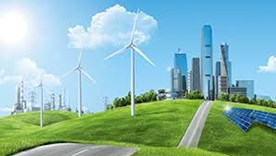 Carbon-free fuel, which can be stored or transported for later use, came a step closer as Siemens prepares to launches its Green Ammonia Energy Storage Demonstrator, in Oxfordshire

The pilot project, developed by Siemens in conjunction with the Science and Technology Facilities Council, the University of Oxford and Cardiff University, has developed the world’s first demonstrator to show the complete cycle of renewable power, storage as ammonia (NH3), and conversion back to electricity.

Ammonia is already produced in vast quantities, mostly for agricultural fertilisers.  Today’s ammonia plants use natural gas or other fossil feedstocks both to provide the energy required to power the synthesis process, and as a source of hydrogen. As a result, ammonia production by these methods releases large quantities of CO2.

The Siemens demonstrator uses water electrolysis to provide a hydrogen supply, and extracts nitrogen from the air. The system is designed to use renewable energy to do this, and to combine the two elements in an established Haber-Bosch process to make ammonia.  Ammonia produced in this way can be a completely carbon-free and practical bulk energy source.

Using renewable electricity to make ammonia for fertiliser manufacturing has the potential to save more than 40 million tons of CO2 each year in Europe alone, and over 360 million tons worldwide.

Furthermore, ammonia can also be used as a fuel for gas turbine engines generating electricity at times when renewable energy is not available, such as on calm days or at night. Therefore it provides a solution to storing energy in sufficient quantities, for a long enough time, to balance significant demands for power and the availability of renewable energy.

When burned, ammonia turns back into nitrogen and water, and doesn’t suffer the CO2emissions associated with fossil fuels.  Although the presence of nitrogen in the fuel carries a possibility of additional NOx emissions, low-NOx ammonia combustion is an active research area and there are well-established selective catalytic reduction processes readily available to remove NOx from exhaust gases.

Ammonia is already transported in bulk over long distances by sea, allowing exports of low carbon energy to countries with limited local renewable resources. The energy can then be released, either in the traditional way by combustion in a gas turbine, or by ‘cracking’ it back into nitrogen and hydrogen and using the hydrogen in a fuel cell – to power electric vehicles, for example.

“Meeting our decarbonisation targets is a big challenge for society today and demands a range of complementary solutions, including a variety of storage technologies.  Carbon-free chemical energy storage – including Green Ammonia – has the potential to work alongside other storage methods such as batteries, and help increase the penetration of renewable power into our energy systems.

“This demonstrator, and the work we’ve done with colleagues from academia, shows that Green Ammonia is a viable option and can help reduce carbon emissions from existing industrial processes as well as provide a means for transporting and storing renewable energy in bulk.”

The demonstrator project is a collaborative effort between Siemens, the Science and Technology Facilities Council, Oxford University and the University of Cardiff. It is part of the Innovate UK Decoupled Green Energy project budget and has been funded with approximately £500,000 from Siemens, and £1 million from Innovate UK.