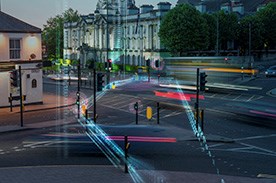 One of the main themes running through Siemens’ Digital Talks conference earlier this year in Liverpool was how the concept of ‘servitisation’ was permeating through many different layers of the manufacturing sector.

One of the main themes running through Siemens’ Digital Talks conference earlier this year in Liverpool was how the concept of ‘servitisation’ was permeating through many different layers of the manufacturing sector.

Driven by the power of increasing digitalisation, servitisation is based around the idea of moving from a one-off transactional relationship to an ongoing service-based one.

For example, a traditional OEM would build and deliver a machine to order. Beyond some fairly basic maintenance support, the commercial relationship would usually end there.

Potentially twenty years later and the client may want a replacement or an upgrade, but by then they could also require a different spec or new configuration which might see them go to a competitor.

In other words, the engagement with the core customer base is primarily time-limited, with no guarantee of any repeat business or any meaningful additional income coming from them.

But digitalisation, and the advent of the digital twin in particular, is quietly revolutionising this business model.

OEMs are now empowered to supply machinery bundled with an ongoing service offer which is linked to continuous improvement, ongoing optimisation and tangible KPIs.

This process sees ‘machine maker’ evolve into ‘machine manager’, with the OEM’s customer generating significant savings through the use of predictive maintenance, energy efficiencies, increased throughput, improved logistics and other productivity benefits.

A great example of this machine-as-a-service (MaaS) approach was demonstrated at the Digital Talks event by TrakRap, a packaging business from Lancashire.

TrakRap demonstrated to delegates how they were now able to sell a ‘pay-per-wrap’ solution to end-users based on them having access to powerful production data via Siemens’ Mindsphere cloud-based operating system.

This however wasn’t based on TrakRap wrestling with terabytes of raw, unqualified information; instead they utilised data which had already been processed on the factory floor via Edge processing before being uploaded to Mindsphere for analysis.

In Liverpool TrakRap also discussed the transformational impact that this move from machine maker to machine manager has had on their business model.

They highlighted that through remote diagnostics and predictive maintenance they could reduce call-out times by over 50%. In terms of the cost to their clients, this equated to over a 70% reduction in downtime.

This meant TrakRap were no longer in the machine selling-business; they were now a service provider who kept getting remunerated each month by clients who were happy to enter into a pay-as-you-go arrangement linked to agreed KPIs and efficiency targets.

TrakRap also shared details of how servitisation now determined the way they financed their business.

Working with Siemens Financial Services, they described how Siemens provided investment in advance, based on a five-year period, which would be repaid via TrakRap’s new servitisation business model.

This arrangement is not unique to TrakRap, and servitisation as the basis for a different approach to financial investment and capital expenditure within manufacturing is another emerging trend.

For example, Siemens was tasked by Pilkington PLC to look into cutting their energy costs and we calculated that to deliver the efficiencies they were demanding would cost several millions.

Pilkington were not minded to invest in such a large sum up front at that time, so Siemens agreed to provide the technology on the guarantee that Pilkington would pay us a fee each year based on the outcome of achieving the energy savings they were seeking.

It was elegantly simple solution – the energy savings Pilkington made from our interventions was translated into financial savings, which in turn was used to pay us back in annual instalments.

Admittedly we were taking a risk, but we were confident that the energy recovery and digitalised solutions being deployed on behalf of Pilkington would generate the energy efficiencies we were being targeted on.

Siemens took a similar approach to a recent contract we secured with Boortmalt, one of the largest malt manufacturers in the world.

Boortmalt tasked us with reducing their production costs by up to 30% by optimising their utility consumption, raw material usage, machine performance and general production processes.

Like Pilkington, Siemens have agreed to work towards a range of outcomes, and the deal was underpinned by a commercial model which sees us being rewarded for the outcomes or performance metrics we achieve and not simply for the hardware and software we install.

Peter Nallen, Chief Operating Officer from Boortmalt, described this arrangement as a “de-risked financing capital investment model” for their business which would “achieve Boortmalt’s sustainability strategy with confidence”.

So, from TrakRap moving from being an OEM specialising in packaging machines to a ‘pay-per-wrap’ vendor, and the likes of Boortmalt and Pilkington remunerating us annually based on our performance and not on the cost of equipment,  you start to see how the evolution of Industry 4.0 technologies and the concept of servitisation are inextricably linked.

As manufacturers ourselves, at the very forefront of digitalisation, Siemens welcomes this disruptive business model. Further, we envisage entire pay-as-you-go factories on the horizon, and more manufacturers migrating to a service-based model through the power of digital twins, Edge processing and secure cloud-based analytics.

In addition, we believe that ‘service’, in all its forms, will emerge as one of the most powerful drivers with regards to increasing a manufacturer’s competitiveness, and that servitisation will very soon become the new normal within all manufacturing disciplines.