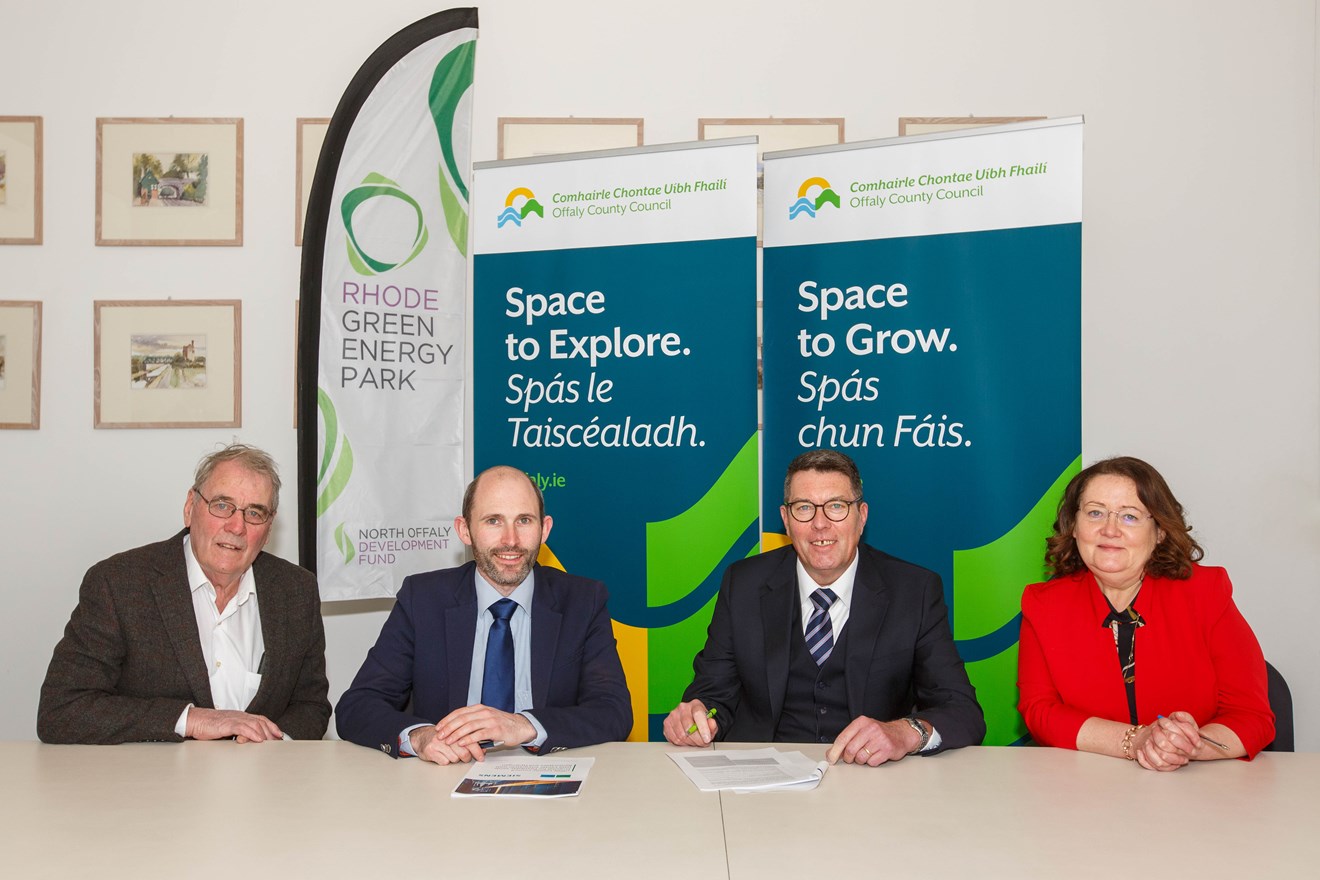 Offaly County Council has appointed Siemens to conduct a leading research project exploring the potential and opportunities for the integration of a data centre with renewable energy and green hydrogen in the Midlands.

Building on the energy heritage built up through the peat-generation era, this project at Rhode Green Energy Park will provide evidence-based research to enhance the development of green energy enterprises within the Midlands, a region in close proximity to the Greater Dublin Area.

Throughout the county, Offaly County Council has taken a lead role in embracing renewable energy in recent years and is examining opportunities in emerging areas including Green Hydrogen and synergies between renewable energy generation, battery storage, large-scale energy usage and spin-off industries.

“The co-location of diverse renewable energy systems integrating into the national grid at Rhode Green Energy Park provides unique prospects for cutting edge innovation and demonstration hubs. Collaborations between industry, academia and stakeholders are underway to explore opportunities such as a Green Hydrogen integration and demonstration hub, and large-scale energy user integration with renewables.  Siemens brings leading international experience and expertise in data centres and renewables”.

Joe Walsh, General Manager of Siemens Limited, Dublin said that his team was looking forward to working on this project which is anticipated to deliver key insights of both regional and national significance as the study will examine how to decarbonise data centres and the key learnings can be applied more generally to Ireland as a whole.”

Councillor Liam Quinn, Cathaoirleach of Edenderry MD and Director of NODF CLG welcomed the initiative. He commented that it demonstrates Offaly’s commitment to innovation and sustainable economic development and is an important milestone in the development of Rhode Green Energy Park.

Siemens employs more than 600 people in Ireland and has facilities in Glasnevin, Shannon, Swords and Letterkenny.

The Just Transition Mechanism (JTM) is a key tool to ensure that the transition towards a climate-neutral economy happens in a fair way, leaving no one behind. It provides targeted support to help mobilise at least €65-75 billion over the period 2021-2027 in the most affected regions, to alleviate the socio-economic impact of the transition.

The National Just Transition Fund (JTF) is a key pillar of the Government’s plan for the Midlands region. A fund was made available in 2020 to support communities transitioning to a low carbon economy.

The objective of the Fund is to facilitate innovative projects that contribute to the economic, social and environmental sustainability of the Wider Midlands region (including East Galway, Kildare, Laois, Longford, North Tipperary, Offaly, Roscommon and Westmeath) and have significant employment and enterprise potential. Offaly is particularly affected as the region transitions away from peat as an energy source.

Offaly County Council (as lead Applicant) and North Offaly Development Company (as partner) have been awarded €75,000 in funding under Just Transition Funding to complete a Research Project / Feasibility Study entitled “Exploring Data Centre Integration with Renewable Energy and Green Hydrogen in the Midlands”.

Offaly County Council and North Offaly Development Fund have previously identified the potential for Data Centre co-location with renewable projects planned and constructed, as outlined in an Opportunity Assessment available at: https://www.offaly.ie/eng/Services/Enterprise-Business-Supports/Green-Energy-Technology/Rhode-Opportunity-Assessment.pdf

Offaly County Council & North Offaly Development Fund have received funding from the Just Transition Fund and are at an advanced stage in the development of Rhode Green Energy Park on the site of the former Rhode Power Station.

The recently conducted Eirgrid consultation entitled “Shaping Our Electricity Future “ identified scenarios and opportunities for grid development. Offaly and the wider Midlands has significant potential in this regard, having the transmission infrastructure which previously serviced peat burning Power Stations. Furthermore, the CRU have recently commented that it was likely that data centres would be asked to locate outside of Dublin (where power demand was highest), to locate close to power sources. Offaly Co. Co. has permitted a significant number of renewable energy development and wishes to explore the potential for data centre integration.

It is also notable that Bord na Mona have recently announced (27/09/21) the development of an Energy Park which is considering similar opportunities.

One of the leading areas of enterprise growth in Ireland is data centres.  There is potential to explore the co-benefits of aligning the energy transition (which is the primary focus of the Rhode Just Transition Project also known as Rhode Green Energy Park) with the transition to a data-driven economy.  This can open the opportunity to attract investment in data centres and associated technology-centred enterprise to the Midlands.

In the future data centres will locate where low-carbon energy systems are available.  This will give a competitive advantage to a sector increasingly concerned with its carbon footprint and corporate sustainability goals.  At Rhode, there is an abundance of renewable energy potential, and the collaborative model for the Green Energy Park can enable waste heat from data centre cooling to be captured and used.  However, further research is required to examine how to release this potential of Rhode and the Midlands.

An emerging area of research and innovation at international level is the use of green hydrogen (created from excess renewable energy) as a data centre energy source.  This has the potential to provide both very low carbon operation and safe back-up energy storage to support data centres.  The development of a green hydrogen demonstration project at Rhode is already being advanced to feasibility stage.

This project would research how best to shape the development of the energy transition project at Rhode to match the data centre sector requirements and ambitions, with a view to attracting significant inward investment and employment creation.

Due to the closure of the power station in Rhode, Co. Offaly the North Offaly Development Fund (NODF) was established with the objective to benefit the community of Rhode and surrounding area. In particular, NODF is intended to assist enterprise creation and development, with the aim of increasing employment and enhancing the economic and social profile in the area. The company received its funding from ESB Networks.

The development of the Rhode Business Park was originally initiated by NODF for enterprise development for the benefit of the local economy and local community.  Redevelopment of the site as a Business Park was approximately 90% complete in 2008 when, due to the on-set of the recession this work stopped.  NODF had by this time invested €1.8million developing the park and Offaly County Council had invested €0.9 million developing the access infrastructure.

In 2020, Offaly County Council commissioned an Opportunity Assessment Report that reviewed the existing activity in the area with a particular emphasis on green energy and the energy transition.  The report identified a number of enterprise and employment opportunities for North Offaly, focussed on the Rhode Green Energy Park.

Offaly County Council subsequently secured close to €1m to completion and transform the park infrastructure, enabling these opportunities to be developed.  This will include integration of renewable energy with industrial and business employment.