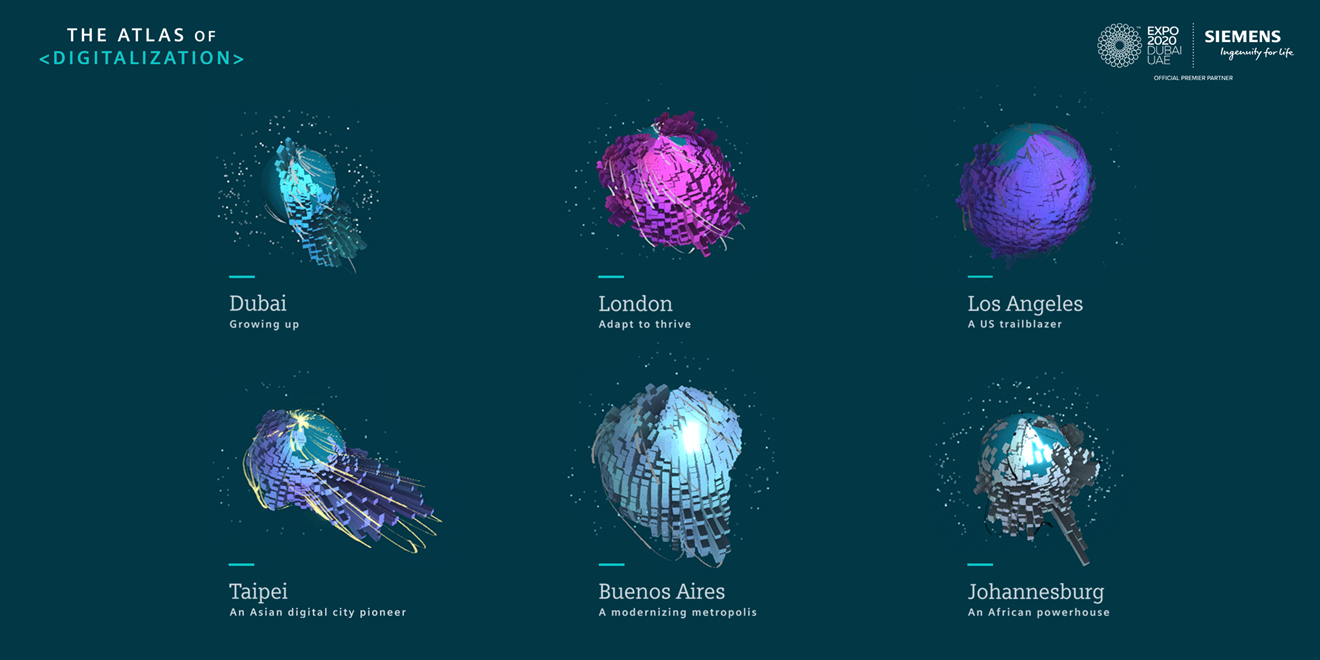 Siemens has launched a new web-based application which reveals the readiness and potential of six major cities to embrace digitalization and develop new ways of living, working and interacting. The Atlas of Digitalization is based around the interconnected themes of Expo 2020 Dubai – Mobility, Sustainability and Opportunity – and assesses how the fourth industrial revolution has already impacted urban life around the world, and the potential it could have in the future.

Data from 21 indicators has been analyzed from Buenos Aires, Dubai, Johannesburg, London, Los Angeles, and Taipei. From this analysis a Digital Readiness Score has been defined, considering areas such as smart electricity and transport systems, internet connections and digital governance services. The score reveals the current level of maturity of each city’s digital infrastructure, and its preparedness for a connected future.

"It is tremendous that London is leading the charge in digitalization among these global cities. In spite of all the economic uncertainty we have been facing in the UK over the last two years this study shows we are still well placed to achieve leadership globally in the fourth industrial revolution if we continue to invest, innovate and grow responsibly and sustainably.”

“However there is more to the UK economy than London and our Northern cities particularly in the Northern Powerhouse must also benefit from innovation and investment. Each city here in the UK and globally must address its own unique mix of challenges and opportunities by embracing digitalization; the key to sustainable, economically vibrant future cities.”

“The Atlas of Digitalization gives us an insight to the current status of digitalization in global cities, and the data tells us London has already made excellent progress. We hope the Atlas will inspire new ways of thinking to shape all the smart cities of tomorrow and realize the global potential of City 4.0,” added Maier.

The analysis takes into account areas such as innovation, greenhouse gas emissions and time spent in traffic to give the cities a Digital Potential Score, indicating where there is opportunity to grow digital capabilities to transform society and economy. Together, the Readiness and Potential scores illustrate the different capacities each city already has, and where they can develop to effect change and growth.

The Atlas recognizes London’s advanced implementation of digital technologies in areas such as the introduction of the congestion charge and the Ultra Low Emission Zone which will dramatically cut nitrogen oxide (NOx) emissions. Currently road traffic in London is responsible for more than half of the city’s NOx emissions.

The Atlas also identifies potential for digitalization to positively impact areas in London such as improving mobile internet speeds and opening up new opportunities for internet-enabled services based on the Internet of Things such as ‘vehicle to everything communications’ to improve efficiency.

Mark Jenkinson, City Director, London, at Siemens said: “As part of the Mayor of London’s ‘Smarter London Together’ plan to transform London into the smartest city in the world, the Greater London Authority has set out how they want to collaborate with the capital's boroughs and services, from Transport for London to the National Health Service: working more effectively with the tech community, universities and other cities to make their vision a reality.”

Data from the 21 indicators has been mapped across three themes: Sustainability, Mobility and Opportunity, creating unique visualization of each city’s digitalization landscape. Visitors to the Atlas of Digitalization can interact with each city and explore its data, taking an in-depth look into how each is addressing its own challenges and opportunities, and how it will impact work and life in future cities.

The Sustainability, Mobility and Opportunity themes are identified by Expo 2020 Dubai as having the power to build partnerships, inspire progress and develop our future cities. Siemens is Infrastructure Digitalization Partner to Expo 2020 Dubai and will use digital solutions to connect, monitor and control buildings at the site using MindSphere, the cloud-based operating systems for the Internet of Things.