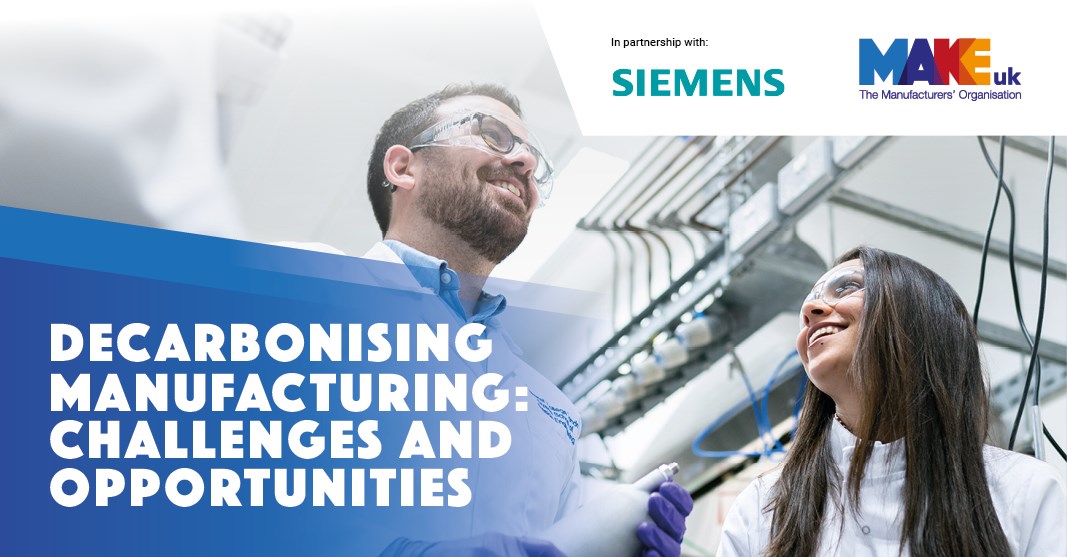 Industry leads the way in the decarbonisation revolution towards Net Zero

Britain’s manufacturers are leading the charge towards net zero and decarbonising their businesses as the sector moves to slash greenhouse gas emissions, cut energy use and switch to renewable and sustainable energy sources.

According to new research, published today by Make UK, the manufacturers’ organisation, and technology company Siemens, manufacturers have moved the decarbonisation of their businesses up the priority ladder despite unprecedented economic challenges, with eight in ten companies saying it is now of high or medium importance. The research - ‘Decarbonising Manufacturing – Challenges and Opportunities published today shows that companies are accelerating efforts to decarbonise due to rising energy costs, the need to do the right thing and the rising cost of raw materials.

Nearly half (46%) of manufacturing companies are already implementing their decarbonisation plans while a further quarter will start decarbonising within the next 12 months. An additional 17% aim to begin the process in the next 24 months.

Energy efficiency is seen as key to achieving decarbonisation with almost half of manufacturers (47%) telling us they have already adjusted their business practices to cut energy consumption in response to the energy price hikes in 2022. The outbreak of hostilities in Ukraine supercharged activity, with three quarters of manufacturers speeding up energy efficiency and decarbonising measures. And just over a third of businesses surveyed said they had already saved money by decarbonising which resulted in improved productivity through streamlining processes.

However, manufacturers face barriers to decarbonise their operations with the cost of upgrading or replacing capital equipment (cited by 42% of manufacturers) topping the list. One in three (31%) said they were concerned about remaining cost competitive and the same number cited the rising costs of energy for fuel switching as the main barrier to change.  A quarter are held back by the challenge of decarbonisation of transport and logistics, with 23% saying decarbonisation of their supply chains is a real challenge for them moving forward as they are not in direct control here. A lack of internal resource is an issue for some companies alongside a lack of appropriate skills.

A third of manufacturers agree that the strategies and initiatives that Government has announced on decarbonisation will help them, but to date we found that understanding and take up of that support has been mixed.  While there have been numerous strategies published by Government this including, including the Net Zero strategy and the Industrial Decarbonisation strategy, there has been little or no, update or progress made against these. Lack of knowledge of available help is holding manufacturers back – just one in ten are even aware of the Government’s Industrial Energy Transformation Fund, badged as the main driver for change.

“Britain’s manufacturers have long shown that they are at the forefront of innovation globally and they have already gone a long way to improve their processes and production in the quest to reach net zero. But in order that they continue at speed, business needs Government to play its part in driving the process forward. This starts with setting a bold and ambitious vision for our Green future. While numerous strategies have been announced, progress has been limited at best. Government must deliver regulate updates to help business understand the Government’s overall intentions and give them the confidence to make investment decisions.

“To turbo-charge investment in decarbonisation projects Government should introduce full expensing on green technologies and expand the R&D tax credit to include industrial decarbonisation. The Help to Grow programme should be expanded to Help to Grow Green, which would support business in their decarbonisation journey and supercharge green investment. Companies should also be incentivised to invest in on-site energy generation, where surplus can be added back to the national grid to improve the UK’s energy security.”

“It is heartening to see increased awareness and action from manufacturers with regards to sustainability. This is an industry-wide challenge that isn’t going anywhere, and transformation needs to accelerate at pace if we are to meet national carbon targets. Technology adoption, supportive government policy and ambitious decision making will help create a resilient and productive sector that is ready for the future.”

Companies surveyed had also seen their ‘green credentials’ increasingly come under the spotlight from customers. Some 16% of companies said sales increased thorough access to new markets as a direct result of decarbonising their business. A further 14% said that decarbonisation had also helped them access targeted finance routes for new projects.

Make UK, the manufacturers’ organisation, is the representative voice of UK manufacturing, with offices in London, Brussels, every English region and Wales.

Collectively we represent 20,000 companies of all sizes, from start-ups to multinationals, across engineering, manufacturing, technology and the wider industrial sector. We directly represent over 5,000 businesses who are members of Make UK. Everything we do – from providing essential business support and training to championing manufacturing industry in the UK and the EU – is designed to help British manufacturers compete, innovate and grow.

From HR and employment law, health and safety to environmental and productivity improvement, our advice, expertise and influence enables businesses to remain safe, compliant and future-focused.