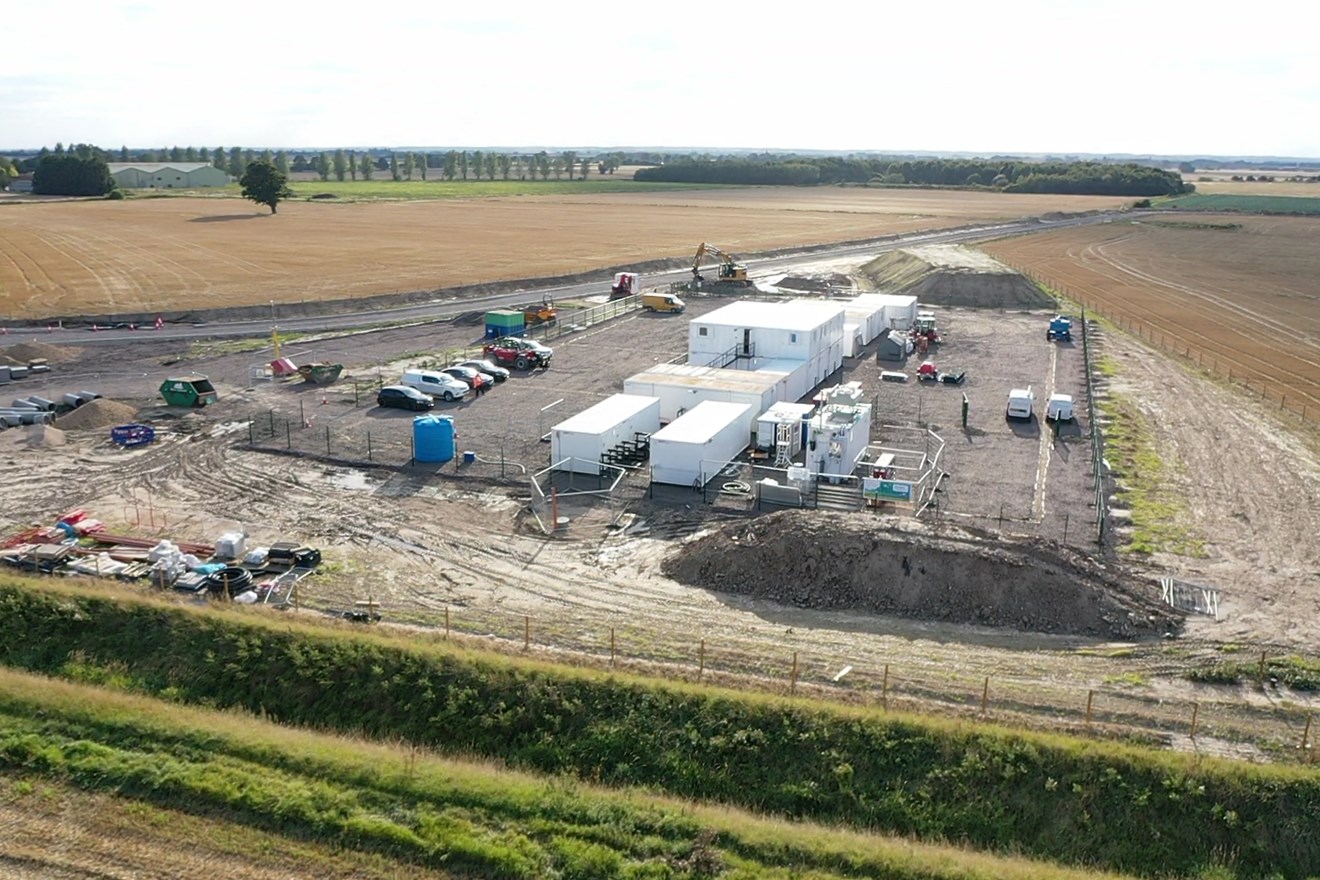 Siemens Energy, lead contractor for the construction of National Grid’s Viking Link interconnector project in Lincolnshire, has installed a zero-emission hydrogen fuel cell to provide off grid power to the project’s construction site for the first time.

Off grid power is needed as this site won’t have a grid connection for at least six to eight months, and the fuel cell system will provide enough heat and power for the construction village during that time, removing the need for diesel generators.

The hydrogen fuelled critical power system was installed in August and will provide 250kVA of standard three phase, 400V electrical power and up to 80kW of heating to around 20 cabins across the construction village. The cabins, which contain welfare areas, offices and meeting space, will be used by Siemens Energy employees and contractors, as work to build the access road continues, and as main works start on the converter station later this year.

The fuel cell system, piloted by Siemens at the Goodwood Festival of Speed in 2019, has been further developed by Siemens Energy’s partner, GeoPura, and now uses the waste heat, which is normally lost from the fuel cell’s cooling system. This waste heat is passed through a heat exchanger to heat water, which is then piped through to heat two drying rooms for the site workers’ personal protective equipment (PPE).

The fuel cell system incorporates 216kWh of battery storage, used to smooth the peaks in power demand and improve the efficiency of the system.  The battery storage also means that should the hydrogen supply be interrupted, the output of the system will be unaffected and can supply power autonomously for several hours.

In addition to powering the cabins and drying room, power will also be provided to six electric vehicle charging points on site.

The only by-product of using a fuel cell to generate power on-site from hydrogen is water, and in contrast to utilising diesel generators - the usual way of providing off grid power to construction sites - it will eliminate NOx and particulate emissions from the area.

Initially the hydrogen supplied for the fuel cell system will come from conventional hydrogen sources, but will move to green hydrogen, once a suitable supply has been confirmed. Projects like this will play a vital role in growing the green hydrogen market in the UK. It is estimated that around seven tonnes of hydrogen will be needed across the duration of the project.

By using green hydrogen, a tonne of CO2 will be saved each week, which is the equivalent of taking 20 cars off the road.

The fuel cell system is based on a single 20ft shipping container which houses all the equipment needed to convert the hydrogen into electricity and heat. Around 300 metres of reusable piping has been installed at the site to distribute hot water from the fuel cell to the cabins and drying rooms.

The development of the fuel cell, since the demonstrator model which premiered at Goodwood, was undertaken at Siemens Energy’s site in Newcastle by GeoPura. The work, which took a year, means the new Mark 1 system is more compact and efficient and can supply hot water as well as electricity. It uses state of the art Siemens Energy monitoring and control for critical power applications and is now able to be manufactured in Newcastle in greater quantity.

Three Siemens Energy apprentices also worked on the project and gained useful learning and development, with each tasked with mini projects which they managed themselves helping develop their skills and build confidence.

Energy Minister Kwasi Kwarteng said: “Hydrogen has a key role to play in the UK’s journey to net zero carbon emissions and I am delighted to see this innovative off-grid power source being installed at Viking Link.

“It is steps such as this which will be vital in enabling a hydrogen economy to flourish in the UK as we build back better with new low carbon jobs.”

Steve Scrimshaw, Vice President, Siemens Energy UK&I, said: “This is a great project and I’m delighted that we as Siemens Energy, with our partner GeoPura, have been able to walk the talk on how to build the hydrogen economy. In order to get the hydrogen economy moving we need to create a market, and it is small projects, such as this, which will increase the demand for green hydrogen, providing a pipeline of work for the supply chain.

“We have 30 years to reach net zero and at that point, we won’t be able to use things like diesel to power a generator. This is truly the future for off grid power – and this project should be a model for others across the country.”

Andrew Cunningham, Managing Director of GeoPura, said: “Siemens Energy is to be congratulated on taking seriously their responsibilities to construction workers, the local community, and the environment as a whole.  Diesel generation is a major contributor to highly damaging CO2, NOx, particulate, and water course pollution.  This project shows that zero emission power generation has reached a point where it can viably replace off grid diesel generation and remove these health risks to the benefit of all.”

Mike Elmer, Viking Link Project Director for National Grid Ventures, said: “As we travel toward a cleaner net zero future, interconnectors play a huge part in ensuring zero carbon electricity gets to where it is needed most. We’re also constantly looking at how we can use greener solutions in the construction of interconnectors like Viking Link.

“The transformative engineering that is using emission-free hydrogen to provide heat and power to our site brings us another step closer to our 2050 net zero targets.”

Viking Link project is a joint venture between National Grid Ventures, part of National Grid, and the Danish electricity system owner and operator, Energinet. The 1.4 GW high voltage electricity interconnector will be the longest in the world when completed, stretching 765km subsea and onshore connecting from Bicker Fen in Lincolnshire, UK and Revsing in South Jutland, Denmark to enable clean energy to be shared.

Siemens Gas and Power GmbH & Co. KG is the global energy business of the Siemens group, which has been working with its customers on solutions for the evolving demands of industry and society for more than 150 years. With planned stock listing, Siemens’ energy business will operate independently as Siemens Energy in the future.
It will offer broad expertise across the entire energy value chain, along with a comprehensive portfolio for utilities, independent power producers, transmission system operators, the oil and gas industry, and other energy-intensive industries. With its products, solutions, systems, and services, Siemens Energy will address the extraction, processing, and transport of oil and gas as well as power and heat generation in central and distributed thermal power plants, and power transmission and technologies for the energy transformation, including storage and sector-coupling solutions. The majority stake in Siemens Gamesa Renewable Energy will round out its future-oriented portfolio. With its commitment to leading the way in decarbonization of the global energy system, Siemens Energy will be a partner of choice for companies, governments, and customers on their path to a more sustainable future. With around 90,000 employees worldwide, Siemens Energy will help shape the energy systems of today and tomorrow. www.siemens-energy.com.

About GeoPura: GeoPura is harnessing the power of hydrogen to generate and distribute the vast amount of zero emissions energy required to decarbonise our transport network and provide renewable energy, where it’s needed, without relying on traditional grid connections.  GeoPura launched on Clean Air Day (20 June) 2019, with an offer to make any car park a renewable energy fuel station generating 100% emissions free off-grid electricity and powering unlimited numbers of charging points.  With an initial focus on supporting the rapidly growing number of Electric Vehicles (EVs) GeoPura is using green hydrogen and fuel cell technology to provide permanent or temporary off grid renewable energy installations.