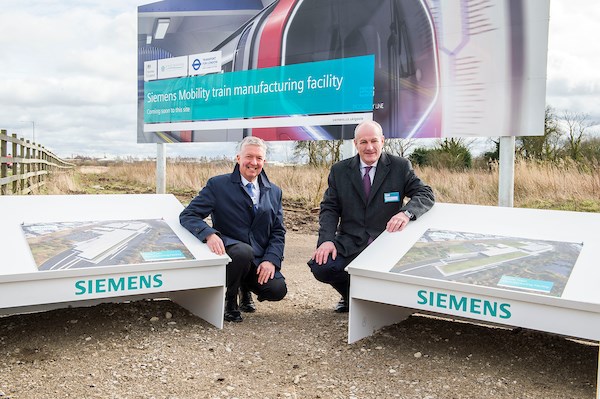 The 12 apprenticeships will be among the first of up to 700 jobs to be created by the development, along with a further 250 during the construction period and an additional 1,700 UK supply chain roles.

A new generation of Tube trains for the London Underground will be built at the East Yorkshire facility and the apprenticeships announcement was made as Mike Brown, London’s Transport Commissioner, visited the Goole site to hear more about the plans.

Mr. Brown and Siemens Mobility executives also met with students at Goole Academy to discuss the exciting career opportunities that will be made available to young people locally by the industry-leading project.

The new apprentices will start this September and spend their first year at college, developing core engineering knowledge and competencies.

In their second year, they will spend one day a week at college and four days a week on placement at Siemens Mobility traincare facilities, building up their practical skills and experience.

Their third year will be split between working full-time at Siemens Mobility’s new Goole facility for six months, followed by a six-month placement at the company’s trains factory in Vienna, Austria, where they will learn from colleagues in a well-established rail manufacturing operation.

The launch of the apprenticeships is part of Siemens Mobility’s strategy to develop a pipeline of future talent for the new Goole facility, supported by comprehensive, high-quality training programmes. It also illustrates Siemens Mobility’s commitment to apprenticeships, with around 150 people in such roles in the UK and a further 400 in other Siemens operations across the country.

William Wilson, CEO of Siemens Mobility Limited, said: “We are delighted to announce we will be taking on our first apprentices for the pioneering Goole rail manufacturing development in September and that applications are now open.

“This will provide a fantastic opportunity for 12 aspiring engineers to launch their careers with us and become among the first members of the team at Goole when the facility becomes operational.

“Building on our extensive existing skills base, we are committed, as part of our investment in Goole, to creating a lasting legacy of rail-related skills for the local economy and the UK rail industry.

“It’s especially pleasing to be able to make this announcement as we are joined in Goole by Mike Brown and colleagues from Transport for London, as the contract we have secured to supply trains for the London Underground is a key catalyst for this exciting investment.”

Siemens Mobility is investing up to £200m in the new Goole facility, where new state-of-the-art Tube trains for London’s Piccadilly line will be built under a £1.5bn contract, replacing the existing 1970s fleet. The new trains will provide increased capacity and an improved passenger experience with wider doors and longer, walk-through carriages. Siemens Mobility is working with London Underground to maximize the number of Tube trains to be built at the Goole facility.

Mike Brown, London’s Transport Commissioner, said: “It is fantastic to see the plans for the new Goole factory where our next generation of Piccadilly line trains will be built and to know that thousands of jobs are being created as a result. Steady and sustained investment in transport means more jobs and meeting local students who could well become the next generation of train engineers brings to life how investment delivers skills and employment all over the country.

“Our long-standing support for apprenticeships is something we’re extremely proud of; it delivers impressive skills and training across the transport and construction industry. Over the past 11 years TfL, its suppliers and partners have employed more than 9,000 apprentices, and we are excited to see that at least 12 more aspiring engineers will be able to start their careers off the back of our order with Siemens Mobility.”

A detailed planning application for the development, at the Goole 36 enterprise zone site, was put forward to East Riding of Yorkshire Council last month following the granting of outline planning consent in July 2019. Pending approval, construction is expected to start by early summer, with the first phase of manufacturing facilities operational by 2023, when the first 12 apprentices will complete their training.

Anyone who would like to apply for one of the new apprenticeship positions should visit: https://jobs.siemens-info.com/jobs/203153