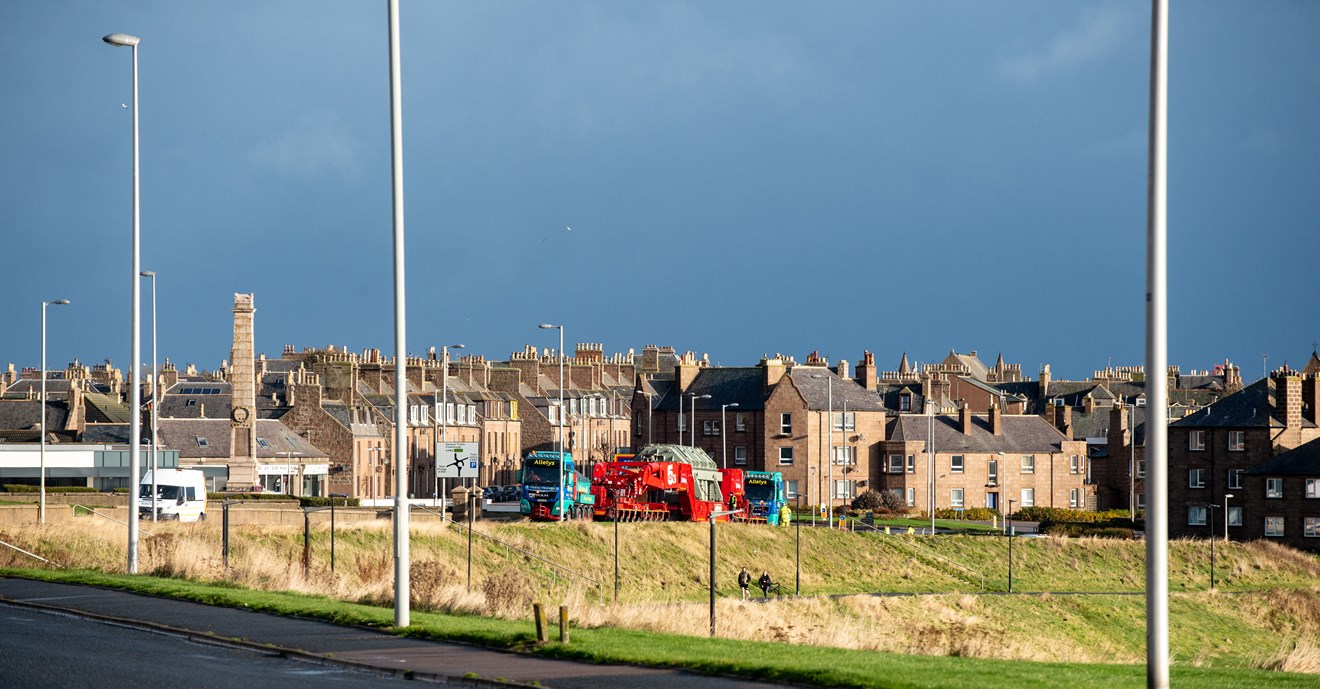 Following a 1,500-kilometre journey by river, sea and road, the first transformer was delivered by Siemens to the onshore substation at New Deer for the Moray East offshore windfarm development.

The transformer was moved from the port at Peterhead to the substation site by a 70-meter-long 20 Axle 350Te Girder Frame transporter on Sunday 27 October with a police escort, due to its size and weight. Each transformer is around 12 meters, the length of three cars and weighing in at 270 tonnes is as heavy as 38 African elephants.

Once the transformer has been skidded into position, the installation of associated electrical equipment will begin. As this is the most important equipment on site, this marks a significant milestone in the project.

Moray East is Siemens’ largest grid connection project in the UK and needs three transformers in total due to its size and scale. Their job is to change the voltage of the power brought onshore at 220,000 volts, so that it can be transmitted into the grid at 275,000 volts to eventually be used by homes and businesses at lower voltages, typically 230 volts in domestic households.

It is anticipated installation of all three transformers will be completed by the first quarter of 2020, with all work completed at the onshore substation site by the end of first quarter 2021

Mark Pilling, EPC managing director, Siemens Transmission and Distribution Ltd, said: “The transformer forms the backbone of a modern energy grid, and its reliable operation is crucial to ensuring a stable and resilient power supply. I’m delighted we’ve been able to get the first of three transformers safely delivered to site and can now begin to undertake some of the most important work in the project’s development to provide low cost, low carbon electricity.”

The windfarm, 22 km off the Aberdeenshire coast in Scotland, will have an installed generation capacity of 950MW after its completion. It will be capable of providing low cost, low carbon power to the equivalent of one million Scottish homes, making a significant contribution to meeting Net Zero ambitions.

The Moray East substation construction site near New Deer is approximately 205,000 m2 (20.5 hectares), with construction starting at the site in March 2019. There are around 130 people on site currently and work has progressed significantly with enabling civils works already completed and main civil works well underway

Marcel Sunier, Moray East Project Director said: “This is one of the largest electrical components for the largest construction project in Scotland, so I am delighted to see it arrive safely on site. The scale of the work involved just to get this transformer to site reflects the magnitude of the project - which will ultimately be capable of delivering almost 40 per cent of the country’s domestic electricity needs. I would like to thank all those involved in enabling us to reach another major project milestone safely.”

The project financing agreements were signed on 28 November 2018 with a syndicate of commercial banks as well as EKF, Denmark’s Export Credit Agency (“EKF”) and the Japan Bank for International Cooperation (“JBIC”). The financing is composed of both project finance, which includes a senior debt facility of £2.1 billion, along with other debt facilities of £0.5 billion, and an equity bridge loan facility to cover part of the equity needs. Financial close occurred on 6th of December 2018.

In September 2017, MOWEL was awarded a 15-year Contract for Difference (CfD) by the UK’s Department for Business, Energy & Industrial Strategy (“BEIS”) for the delivery of 950MW of offshore wind generation at £57.5/MWh (2012 tariff-based). The wind farm is expected to be operational by 2022.

2010 – project development commenced when development rights were won in the UK’s third round of offshore wind licencing. The Moray Firth Zone (Zone 1) was split into two, Moray East and Moray West. For technical reasons, Moray East was developed first

2017 – A 950MW Contract for Difference (CfD) was won in the UK Government’s second competitive CfD auction.  The CfD provides a contract for electricity for 15 years at £57.50/MWhr

Siemens Gas and Power (GP) is a global pacesetter in energy, helping customers to meet the evolving demands of today’s industries and societies. GP comprises broad competencies across the entire energy value chain and offers a uniquely comprehensive portfolio for utilities, independent power producers, transmission system operators and the oil and gas industry. Products, solutions and services address the extraction, processing and the transport of oil and gas as well as power generation in central and distributed thermal power plants and power transmission in grids. With global headquarters in Houston in the U.S. and more than 64,000 employees in over 80 countries, Siemens Gas and Power has a presence across the globe and is a leading innovator for the energy systems of today and tomorrow, as it has been for more than 150 years.