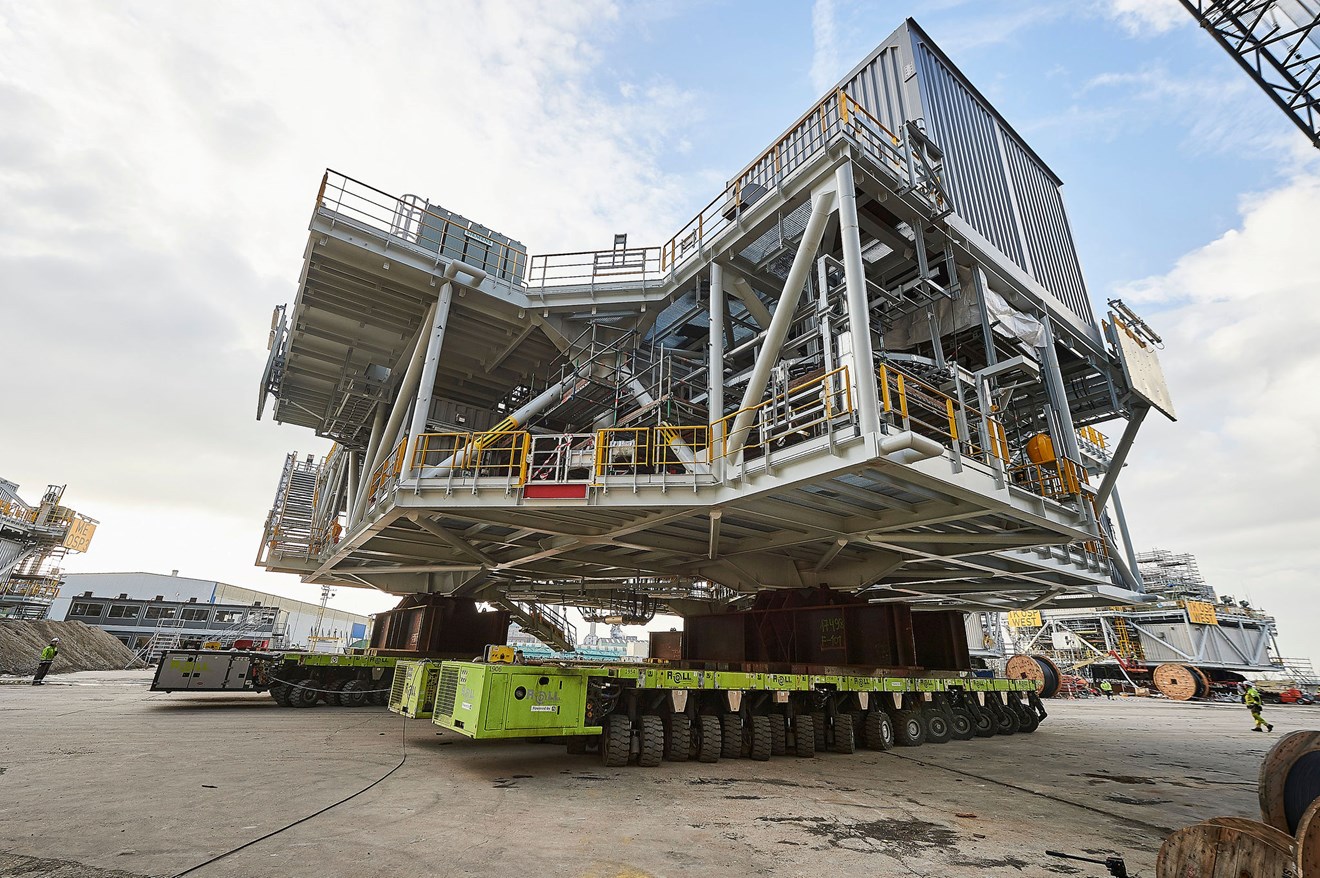 The third and final Siemens Energy Offshore Transformer Module® (OTM®) is ready to leave the fabrication yard this weekend to sail to the Moray East offshore windfarm project, located 22km from the Aberdeenshire coast in Scotland, marking a significant milestone in the project’s development.

An OTM is the substation platform out at sea and in a world’s first, three of these will be connected with the capacity to deliver 950MW clean energy from the Moray East project.

The OTMs, which were fabricated and fitted out in Hoboken, Belgium by Smulders, ENGIE Solutions and Siemens Energy, are an essential part of the wind farm. They stabilise and maximise the voltage of the power received from the offshore wind turbines before transmitting the electricity to shore.

The OTMs will sit on three-legged jackets and each weigh-in at around 1,100 tonnes. Each module will transmit the power generated by the 100 turbines across the 295km2 site, back to shore and into the national grid where it will be distributed to homes and businesses.

The OTM, which is significantly smaller in size and weight compared to conventional alternating current offshore wind platforms, will transform the output voltage of the wind turbines from 66 kV to the transmission to shore voltage of 220 kV.

Siemens Energy designed the OTM using a modular fabrication approach which saves cost and time in the delivery. It also means the design can incorporate the specific needs of the developer. The switchgear needed to control the incoming and outgoing electrical circuits is housed in stainless steel containers which are constructed and installed on the platforms. Additionally, the power transformers are filled with synthetic ester, rather than traditional oil, meaning they are fire resistant.

Mark Pilling, Head of Transmission Solutions, Siemens Energy UK&I said: “This is a significant milestone in the project to bring low cost, low carbon power to homes and businesses across Scotland. Using a modular approach means we have been able to optimise the platforms to the specific needs of the customer and the area being developed, ultimately saving time and cost for the developer. Achieving this milestone is a testament to the hard work of the team who have delivered these components with zero snags to the customer, which is an incredible achievement.”

Marcel Sunier, Project Director for Moray Offshore Windfarm (East) Ltd said: “This latest major milestone in the delivery of Moray East is a reminder that the step-change in the transition to low-cost, low-carbon power is enabled by scale and by world-leading innovations.  Those innovations include the use of three OTMs, whose modular construction itself marked a major advancement in offshore transmission technology.

“I would like to thank all those working for the contractor and subcontractors involved in advancing the project’s transmission infrastructure safely to this point. As a well-known supplier in the UK market, Siemens Energy, responsible for the delivery of the project’s transmission infrastructure, has created opportunities for local UK firms to participate in the global offshore marketplace on which offshore wind depends for making renewable energy highly competitive.”

Smulders’ Project Manager, Bart Van Rooy said: “The fabrication of the OTMs according to the Siemens Energy modular design approach with skidded-in containers was a success. This milestone – three sail-aways without any snags – reached in a period dealing with a lot of COVID restrictions, has been achieved not only due to the very good co-operation between Siemens Energy and Smulders – ENGIE Solutions on all levels, but also due to the fact the structural and electrical works could be executed in parallel for the major part of the construction period.”

Mark Dirckx, Head of Industry segment ENGIE Solutions said: “We are proud to have contributed to this important renewable energy project, that combines the expertise of the Siemens Energy, Smulders and ENGIE Solutions teams. This achievement is the result of close cooperation between all the partners and strengthens the ambition of ENGIE Solutions to be an accelerator of the low-carbon energy transition.”

Siemens Gas and Power GmbH & Co. KG is the global energy business of the Siemens group, which has been working with its customers on solutions for the evolving demands of industry and society for more than 150 years. With planned stock listing, Siemens’ energy business will operate independently as Siemens Energy in the future.
It will offer broad expertise across the entire energy value chain, along with a comprehensive portfolio for utilities, independent power producers, transmission system operators, the oil and gas industry, and other energy-intensive industries. With its products, solutions, systems, and services, Siemens Energy will address the extraction, processing, and transport of oil and gas as well as power and heat generation in central and distributed thermal power plants, and power transmission and technologies for the energy transformation, including storage and sector-coupling solutions. The majority stake in Siemens Gamesa Renewable Energy will round out its future-oriented portfolio. With its commitment to leading the way in decarbonization of the global energy system, Siemens Energy will be a partner of choice for companies, governments, and customers on their path to a more sustainable future. With around 90,000 employees worldwide, Siemens Energy will help shape the energy systems of today and tomorrow. www.siemens-energy.com.

Moray East Project Ownership & Finance: The 950MW wind farm is being developed by Moray Offshore Windfarm East Ltd (MOWEL), which is a joint venture company owned by Diamond Green Limited (33.4%), EDPR (33.3 %), ENGIE (23.3%) and CTG (10%). The project financing agreements were signed on 28 November 2018 with a syndicate of commercial banks as well as EKF, Denmark’s Export Credit Agency (“EKF”) and the Japan Bank for International Cooperation (“JBIC”). The financing is composed of both project finance, which includes a senior debt facility of £2.1 billion, along with other debt facilities of £0.5 billion, and an equity bridge loan facility to cover part of the equity needs. Financial close occurred on 6th of December 2018. In September 2017, MOWEL was awarded a 15-year Contract for Difference (CfD) by the UK’s Department for Business, Energy & Industrial Strategy (“BEIS”) for the delivery of 950MW of offshore wind generation at £57.5/MWh (2012 tariff-based). The wind farm is expected to be operational by 2022.

2010 – project development commenced when development rights were won in the UK’s third round of offshore wind licencing. The Moray Firth Zone (Zone 1) was split into two, Moray East and Moray West. For technical reasons, Moray East was developed first

2017 – A 950MW Contract for Difference (CfD) was won in the UK Government’s second competitive CfD auction.  The CfD provides a contract for electricity for 15 years at £57.50/MWhr